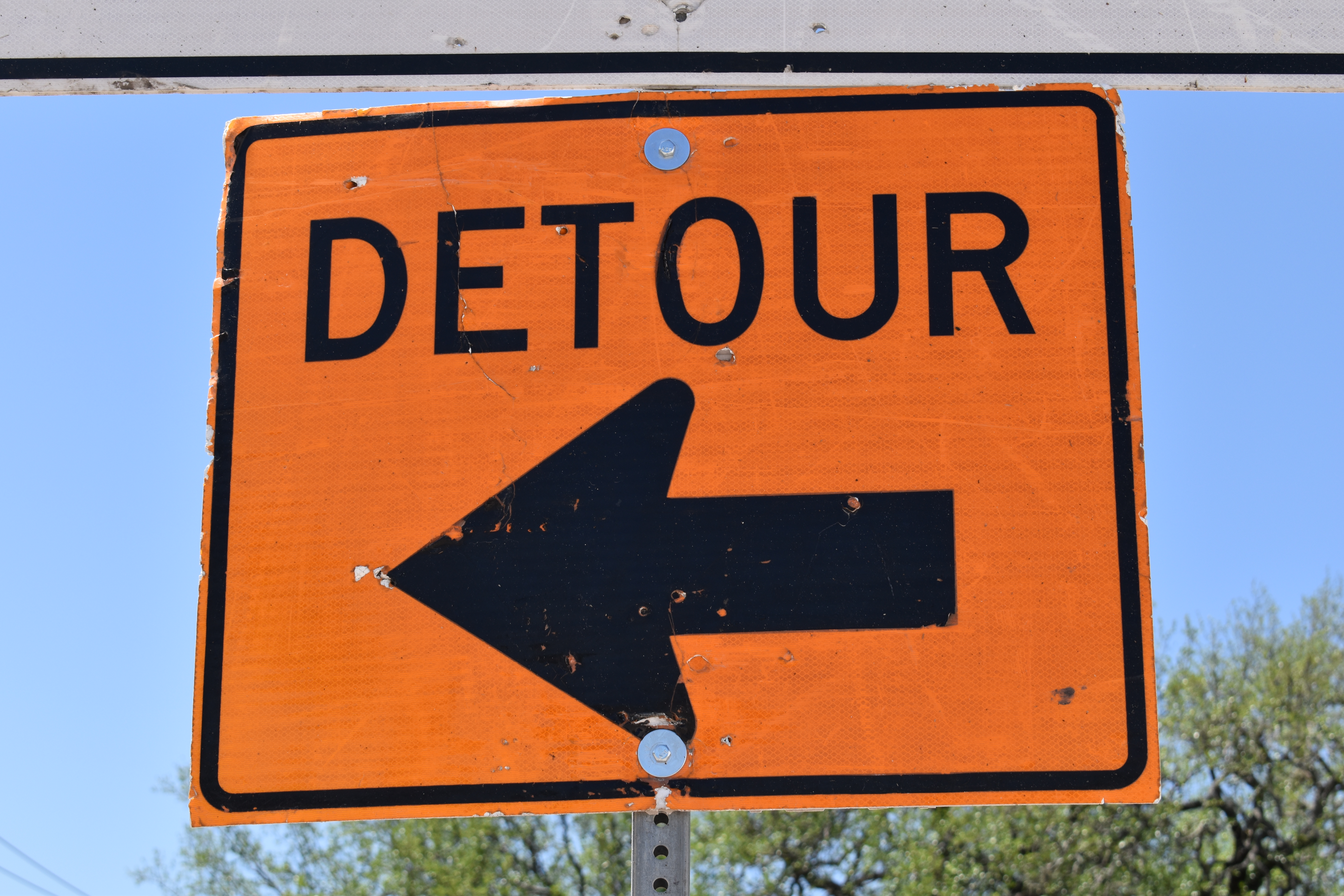 Losing It! The Detour.

In our last segment, entitled The Party, I was in my third and fourth week post-op. I adapted to very soft foods and eventually was able to eat some party foods. I was surprised to discover that many of the vitamins and supplements were too sweet for me, therefore I contacted my nutritionist for his assistance. Fortunately, he was able to find a solution to the vitamin issue! Overall, I was very successful with my weight loss!

I was very apprehensive about Thanksgiving! Can’t you just taste it? Tons of unhealthy options! Each coated in a special sauce or gravy. Some of the possibilities were guaranteed to blow-up in my stomach and cause chest pains or a bout of dumping syndrome. Yeah me!

Like us, many of you alternate where you go for each holiday celebration to accommodate both sides of the family. This year, we went to Aunt Alice’s house for the festivities.

I personally see the holiday season as a celebration so I was not going to mention anything about my dietary restrictions! Therefore, when Aunt Alice asked if anyone wanted unsweet tea, I didn’t say anything and I ended up drinking sweet tea that was way too sweet for me! Everything else turned out to be really easy. For protein, I had a small slice of ham and turkey. For fruits and vegetables, I had some cranberry sauce and plain green beans. I avoided anything else with a sauce, gravy or bread. I was saving some room for a miniscule piece of Aunt Alice’s famous cheesecake. Apparently, it wasn’t bad enough that I was having sweet tea, I needed to add some more sugar into my, until then, sugar-free diet. This did not go well! My body started shaking and it turned my stomach. Fortunately, the only person who noticed was my husband. I told him that I couldn’t do sweet tea again. He agreed and decided to ask for unsweet tea in the future as well.

The following week, I was driving my son to school when I started to notice pain on the right side of my body in the rib cage area. It kept intensifying so I decided against the gym and instead went home. Once there, I began to feel very nauseous and the pain kept getting more intense. It felt like someone hit me in the ribs with a baseball bat! I realized that I needed to go to the hospital or get in to see my surgeon. Fortunately, Dr. F said he could see me later that afternoon! At Dr. F’s office, I learned that it was likely my gallbladder and that they needed to do additional tests immediately. We also learned that Dr. F was not on my insurance plan. I was really upset! But he called one of the surgeons within my insurance group and made arrangements for me to be seen the next day. Later that night I went in for my ultrasound.

I met with my new surgeon the next morning and he confirmed that it was my gallbladder. Apparently, it was full of gallstones and needed to be removed within a couple of days. He also mentioned that my blood work indicated that something else could be problematic during surgery—but that it was unlikely because my skin tone looked normal. So, we set the surgery up for Friday.

When I opened my eyes following surgery, it was to my husband, who looked very concerned. The doctor came in and said I needed another operation because my bile duct was completely blocked and they were admitting me to another hospital immediately!

My husband drove me to an in-network hospital, but was warned that I could not have any food or drinks until they determined whether my next surgery would be that night. Once I arrived at the hospital, the nurse admitted me. But what nobody, but my husband and I were thinking about was the fact that I had not had anything to eat or drink since 6:00 pm the day before. Therefore, my condition rapidly deteriorated! Finally, they sent a nurse in to get me hooked up to an IV. Unfortunately, she was unable to find a good vein because I was extremely dehydrated. The next nurse came in and tried, but I didn’t even bleed when she kept poking holes in my arm and hand. Finally, the “vein whisperer” was brought in and she was able to get an IV in my arm on the first try. I was too tired to care at that point! It was another two and a half hours before they told me I could have a liquid only diet until midnight because I had surgery scheduled for the next day around noon.

The anesthesiologist put me under and the next thing I remember I was awake. They asked me how I felt and I specifically remember telling them that my jaw hurt. I wouldn’t learn the reason for five or six weeks. In any event, they told me that my stomach was too small to perform the surgery. They had to track Dr. F down and get permission to dilate my stomach so that they could get to my bile duct. Thus, the hospital put me back on liquids only because I needed a third operation. The next morning, they were able to access my bile duct and remove all the gallstones that had accumulated. But I had to stay in the hospital for a fourth day. Yeah me!

You would think that this was the extent of my traumatic visit to the hospital, but you would be wrong! I’ve just spent four days in the hospital and discovered that this is not the place for any bariatric patient! Here’s why…sugar-free was rarely an option and high-protein meals were rare. At least that was the case at this hospital.

My hospitalization was highlighted by my mostly liquid and quite uninspiring “diet”. My “diet” consisted of juice, water, popsicles, jello, and broth cubes that were dissolved into water as well as the occasional hot tea. How much of this was sugar-free? The water, tea and the salt-laden fake broth. The juice, jello and popsicles were all sugar-filled, double portions and the biggest part of my diet.

Two days into my stay, it dawned on me that they were taking my blood and checking it every four hours. I finally asked them why. Apparently, my blood glucose levels were off-the-charts! Well I wonder why? They wouldn’t give me any food because they couldn’t figure out when each of my surgeries were going to be. They kept pushing juice, popsicles and jello that were full of sugar. Then they get freaked out because my glucose levels were bad. After I grilled one of the nurses, I discovered that you could get a couple of sugar-free items if you knew what to ask for, but the options were extremely limited and to be frank—nasty!

I could not get out of the hospital quick enough! The first thing I did was have a good meal!

I was not very successful with my weight loss due to my hospitalization, three surgeries and my unfortunate diet. My name is Desiree Dunning. I am 45 and I weigh 181 pounds.

Traveling? Take a look at the Good Eats Local Travel Guide for the best restaurants and local activities!

Stay in the loop with our Guide to Good Eats & Craft Beers!

SEE ALL SEGMENTS OF LOSING IT!